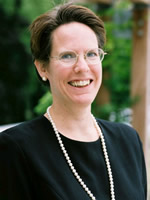 Alice Stokke joined the Rule of Law Collaborative (ROLC) in July 2020 as Senior Fellow. Prior to ROLC, she joined the University of Washington School of Law in 2003 and has worked with programs building capacity in higher education in Afghanistan since 2004.  She has served as Co-Director of the DOS-INL-funded Legal Education Support Program-Afghanistan (LESPA) programs since 2012.  She administered its predecessor DOS-INL-funded program, the UW-Afghan Legal Educators Program, since its inception in late 2004.

She additionally served as Co-Director of the successful UW-LESPA Jessup Moot Court Competition 2014-2016, also funded by DOS-INL.  She has traveled to Afghanistan over 20 times for these grants and has established strong relationships with faculty and deans at the major universities in Afghanistan and with the Ministry of Higher Education.

As Director of International Grants and Contracts at UWLS, she has administered over $30 million in private and federal grants since 2004.  She has also analyzed investor protection laws in Vietnam for the World Bank’s Doing Business Report (2007).

Prior to joining UWLS she practiced commercial and real estate law and has additional experience in banking and finance. A graduate of the University of Virginia School of Law, she has been admitted to the bar in Connecticut and Washington.