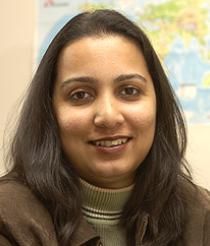 Anu Chakravarty studies institutions and behaviors during violent conflict and its aftermath, the post-conflict transitional phase. Her book with Cambridge University Press (Studies in Law and Society) is just out. Title: Investing in Authoritarian Rule: Punishment and Patronage in Rwanda’s Gacaca Courts for Genocide Crimes (2016).

She has particular expertise in designing research projects, conducting fieldwork and handling data generated in high-risk research contexts. Where appropriate (in terms of field strategy) and useful (in terms of analytical leverage), she uses a range of qualitative strategies combined with other methodologies (surveys, game theoretic frameworks and experimental designs). Her research is on Africa, particularly Rwanda and east-central Africa, and South Asia, particularly India.

The following institutions have supported her research at various stages: the Ford-Foundation funded Program for Transnational Contention, the Peace Studies program and the Mario Einaudi Center for International Studies at Cornell University, the Joan B. Kroc Institute at the University of Notre Dame, the Center for Advanced Study in International Development at Michigan State University, and a Provost’s Grant for the Social Sciences at the University of South Carolina.

She enjoys bringing a research perspective to the practitioner world—and have participated in The Carter Center’s Election Observation Mission in the Presidential and Legislative Elections in the Democratic Republic of Congo (2011), and served as consultant on asylum application cases to the US and Canadian governments as well as pro bono clinics at US-based law schools.

Her interest is in exploring the micro-dynamics of macro phenomena such as regime consolidation, political radicalization, and social-structural change. Her work explains micro-macro linkages by tracing the impact of the micro-level behaviors above upon these larger systemic variables.

The book project Investing in Authoritarian Rule draws on 18 months of intensive field research (across multiple sites: prisons, communities, courtrooms, government offices) in Rwanda. It explains how confessing, denouncing and judging behaviors are generated at the grassroots based and community run genocide tribunals—and traces the impacts of these behaviors on authoritarian regime consolidation.  The book explores how a locally based transitional legal process helped the state to sink deep roots at societal level and generate various forms of self-interested support for authoritarian rule from the ground up.

In other projects, she has examined the impact of micro-credit resources on rescue activity (during witch hunts in a chronically underdeveloped part of India) and the impact of the institution of inter-ethnic marriages on successful rescues during genocide (Rwanda).  The question of political radicalization of socially or legally stigmatized populations is explored in a forthcoming article in African Affairs. It explains the conditions under which non-elite Hutu who are otherwise moderate in their political attitudes begin to radicalize (Rwanda). In a different case, a variety of moderate and radical responses by Dalit (formerly untouchable) activists against the state are the foci of inquiry (India).