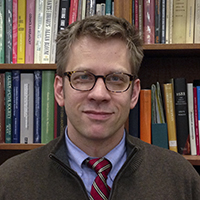 Colin Wilder is the Associate Director of Center for Digital Humanities at the University of South Carolina. In this capacity, Wilder authors and/or supervises many of the projects under development at the CDH. He is the director (PI) of the Republic of Literature and of the Dirty History Metacrawler (a Linked Open Data R&D project in 2013-2014). Wilder has also collaborated with other scholars, both at the University of South Carolina and beyond, on projects like Global Garibaldi (with Don Doyle, History, USC), the Lost Woman (with Sara Schwebel, English, USC), Plants and Planter (with Kate Boyd, John Nelson and Henry Fulmer, all USC), Huon d’Auvergne (with Steve McCormick, Languages, Literature and Culture, USC) and the Victorian Lives and Letters Consortium (international).

Wilder has been working in Digital Humanities for several years, beginning with constructing his own databases for recording complicated humanities data from his research on the intelligentsia in Germany in the 16th through 18th centuries. More recently Wilder has turned to writing code in Python for data extraction and text analysis of Central European library catalogs. He has presented preliminary results from this at the Sixteenth Century Studies Conference in 2013.