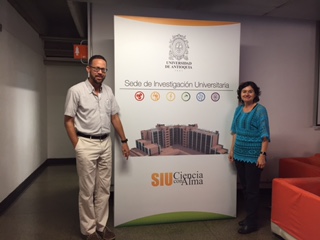 Over spring break, ROLC Associate and Clinical Assistant Professor in the Department of Epidemiology and Biostatistics Dr. Myriam Torres returned to her alma mater, the Universidad de Antioquia, in Medellín, Colombia for an institutional visit, where she received a Master of Public Health. Dr. Torres also holds a PhD in Epidemiology and a Master of Science in Public Health from the University of South Carolina.

Dr. Torres is the Director of the Consortium for Latino Immigration Studies, which promotes and coordinates interdisciplinary and transnational research on the experiences of Latinos in South Carolina and the U.S. Southeast, as well as encourages and supports organizations that are involved with the growing Latino population. In October 2016, the Consortium held their sixth annual Conference on Immigration to the U.S. South, which focused on the challenges and opportunities of immigrants in the South and nationwide.

Dr. Torres’s research has focused on Hispanic health needs in the state of South Carolina and empowering Latinas to shape public health policy. She has published on topics such as reducing maternal and child health disparities among Latino immigrants in South Carolina, HIV/AIDS knowledge and intention to get tested among pregnant Latinas, and the relationship between Spanish-speaking patients with limited proficiency in English and rural hospitals. She is currently collaborating on an assessment of mental health needs for Latinos in South Carolina, as well as the resources that are available and the challenges that the area currently faces.

Visit to the Universidad de Antioquia

After a fall 2016 visit by a delegation from the University of South Carolina to the Universidad de Antioquia, Dr. Torres was enthusiastic about strengthening connections between the two universities. Dr. Tom Chandler, Dean of the Arnold School of Public Health, asked her to arrange a follow-up trip for herself and ROLC Associate Dr. David Simmons, whose work relates to anthropology and public health and has worked with Dr. Torres over the past few years.

Dr. Torres and Dr. Simmons spent their spring break visiting the Universidad de Antioquia. Following the visit, Dr. Torres found herself impressed with the university’s school of public health, particularly with the work they are doing in tropical and infectious diseases. Starting in 2015, for example, the university has focused on collecting data to help determine why Colombia and other Latin American countries have been unable to eradicate certain infectious diseases, as well as research on Alzheimer’s disease, which Colombians from a particular region tend to get earlier in life than individuals in many other countries. Dr. Torres described the university as an institution with a lot of “political will,” echoing an important component of a robust rule of law. “Almost every unit has political awareness, sometimes much more evident than we have it here,” she said. “We have to be political, we have to be advocates, we have to be active.”

Dr. Torres now hopes that the University of South Carolina and the Universidad de Antioquia will be able to create a connection in which the two universities are able to learn from each other and faculty, students, and staff are able to collaborate. She also hopes to integrate the other elements that impressed her from her trip, such as the political awareness and applications the Universidad de Antioquia is able to create through their public health work, into her work at the Arnold School of Public Health.