The Raging Storm: A Reporter’s Inside Account of the Northern Uganda War 1986-2005 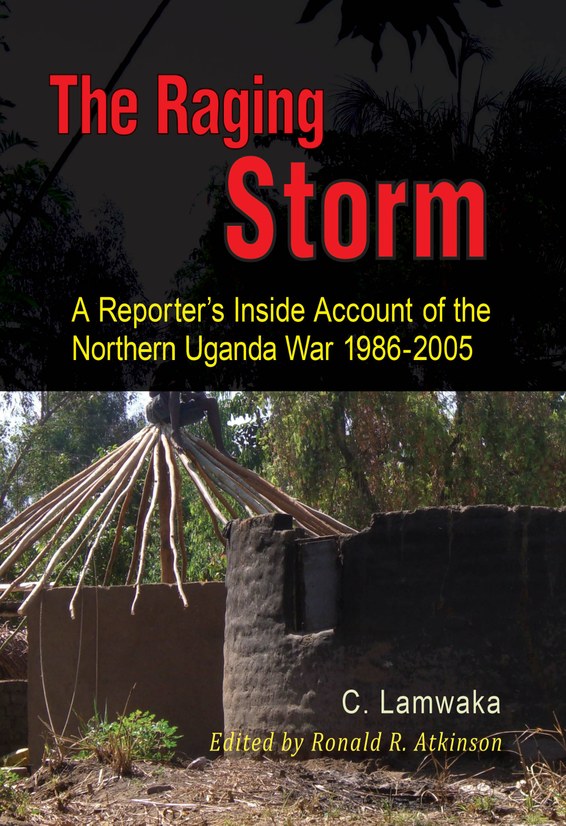 The Raging Storm: A Reporter’s Inside Account of the Northern Uganda War 1986-2005, by Ugandan journalist Caroline Lamwaka, details the war between the Ugandan government forces, the National Resistance Army (NRA), and different rebel forces, predominantly in the northern region of the country. Lamwaka served as a war correspondent for the New Vision newspaper for several years during the first decade of the war, and her personal experiences form a significant part of the book. The war was caused by the overthrow of the government of General Tito Okello Lutwa by the Yoweri Museveni-led NRA when they seized control of Kampala, the nation’s capital, on January 25, 1986. The Ugandan National Army (UNLA) retreated from the capital and, after initially resisting, disbanded towards the end of 1986.

Lamwaka’s personal experiences inform a large portion of the book. In great detail, she describes her efforts to report on the conflict and the peace process, including her interactions with leading figures from different groups involved in the conflict, her travels, and the professional and personal challenges of being a journalist during the conflict. The author observed, for example, that the more intense the conflict, the more human rights abuses were committed by the army. Conversely, there were fewer killings and other abuses when there were relative lulls in the conflict. In addition, the government was often more prepared to act on cases of human rights abuses committed by its soldiers in more peaceful times than during intense periods of war.

The second chapter of the book gives a brief overview of the political history of the country, from the formation of the Ugandan protectorate and the use of a divide-and-rule strategy by the British colonists, thus creating schisms among the various tribes. The book also traces the initial formation of political parties in the country, predominantly along tribal lines. These tribal tensions in the country sparked the northern Ugandan war. The first northern armed opposition to the government, the Ugandan People’s Democratic Army (UPDA), was formed in neighboring Sudan, and many of its officers belonged to the former UNLA. The reasons stated for its creation were the violation of human rights by the NRA and the violation of the Nairobi peace accords by the NRA. The other rebel groups that formed were called “Holy Spirit Movements.” The major Holy Spirit Movements were formed by Alice Auma, Joseph Kony, and Severino Okoya. Although they were different groups, the Holy Spirit Movements were characterized by the religious fervor of their soldiers and unconventional methods of warfare, such as the use of stones as weapons and smearing red clay on their skins, which they believed would prevent bullet penetration. These methods often led to conflict with the UPDA.

The war soon spread to other areas in northern Uganda. Thousands of people displaced by the conflict congregated in informal camps and NRA detaches. The people in the camps faced food shortages, poor hygiene, and a lack of adequate healthcare facilities. Several attempts were made to end the conflict, but they proved unsuccessful. In 1995, rebel forces claiming to be fighting for a Muslim agenda started to operate in southern and western Uganda. The author asserts that Joseph Kony’s Holy Spirit Movement, now called the Lord’s Resistance Army (LRA), and other rebel groups were sponsored by Sudan to spread a Muslim agenda. The involvement of the Sudanese government altered the nature of the conflict.

According to the author, “War and displacement had led to major impoverishment in northern Uganda and exacerbated the already existing infrastructural, economic and social disparities between the north and south of the country.” Attempts by the government to redress the economic and social disparities among tribes and regions failed due to corruption, mismanagement, and a lack of impact due to being thinly spread across many districts. According to Lamwaka, the obstacles to peace in Uganda were greed for wealth and power, as well as the influence and interference of external powers. The author identified that there was a compelling need on the part of government and all other concerned parties—donor organizations and governments, international and local NGOs, politicians, journalists, and researchers—to promote human rights while also continuing to pursue dialogue with the rebels to bring an end to the war.

Among the many costs of the war was the widespread violation of fundamental human rights. The author hoped that with peace, the basic human rights and dignity of individuals in northern Uganda would be restored, and human rights violations by rebels and the NRA would be addressed, as well as compensation provided to the aggrieved parties. The government, however, decided not to revisit cases of reported human rights violations committed by its soldiers before 1995. Under the 1995 Ugandan Constitution, the mandate to investigate abuses from October 1995 was given to the Uganda Human Rights Commission (UHRC). Although the UHRC was hindered by a shortage of manpower, the author found that the reports of human rights violations by the UPDF towards civilians had drastically dropped since the UHRC opened its office in 1999.

The governments of Uganda and Sudan signed a peace agreement in December 1999. Chapter 15 of the book discusses the various peace attempts between 1999 and 2005, as well as the government’s all-out assault on the LRA, called Operation Iron-Fist, launched in 2002, and the rebels’ vicious retaliation against civilians. After the death of the author in 2006, ROLC Associate Dr. Ronald Atkinson, who edited the book and prepared it for publication, wrote about the end of the long war in northern Uganda. This was largely caused by the dwindling of LRA forces after pursuit not only by Ugandan forces, but also by forces from the African Union, Democratic Republic of Congo, South Sudan, and a contingent of U.S. Special Forces. In the Acholi region, by 2009-2010 the gradual process of people leaving the camps had largely concluded, although a few camps remained until 2012. The transition process, however, has been plagued by numerous land disputes and corruption in the government’s promised Peace, Recovery and Development Plan. Since the conclusion of the war, there have been improvements in the educational sector, development of infrastructure such as roads and bridges, upgrading of health care facilities, and investment in agricultural development. The recovery of the people affected by the war has been made possible by civil society support. The book ends with the hope that, with peace in the region, the people of northern Uganda can focus their attention away from safety and instead on improving their lives.

NOTE: This summary is produced by the Rule of Law Collaborative, not by the original author(s).